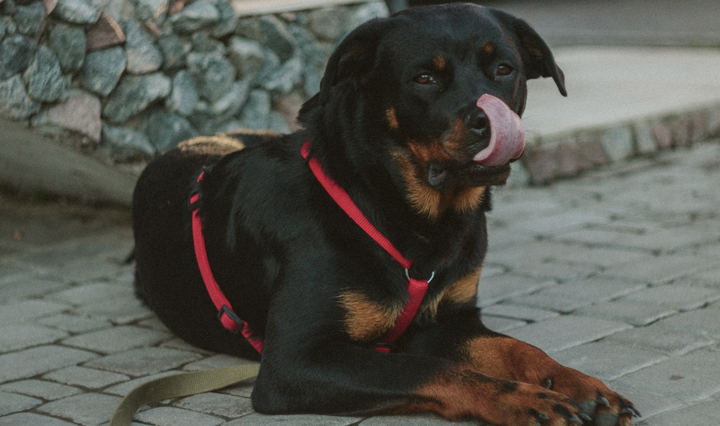 Strong and aloof. Fierce and protective. These are the terms used to describe a Rottweiler. Also known as the Rottweil dog, the Butcher’s dog, the Rott and the Rottie, they are a solid and deep chested dog who are highly intelligent and have a strong guarding instinct.

Sadly, the Rottweiler has developed a bad reputation of being a dangerous dog because of irresponsible breeders and owners who have not trained or socialised their dogs. When a Rott is raised the right way their confidence, calmness and the need to please people make them the right choice for police, therapy, show, service and guide dog work.

Male Rottweilers will stand 24 to 27 inches at the shoulders and weigh between 90 and 130 pounds. The females will be smaller and lighter at 22 to 25 inches and weigh around 100 pounds. They have a short coat that is easy to groom and regular brushing will control shedding. The Rottweilers have one standard colour, that is solid black with rust to mahogany markings. Their high tail is usually docked and kept very short.

A well bred Rottie will be poised, calm, courageous and not unjustifiably aggressive. The aloof behaviour these amazing guardians portray to everyone masks their playfulness and silliness that their owners absolutely adore. Training at an early age and socialisation will channel a Rottie’s territorial instincts in a positive direction.

The origin of the Rottweiler is not so well known. But most historians believe that this breed has descended from the drover dogs that were being used by the Romans to move livestock centuries ago. The Rottweiler has played various roles in its history that include being livestock guard and herder, guard dog, police dog, therapy dog and house pet.

Popular media have deemed the Rotts to acquire a bad reputation of being aggressive and an unsafe dog, but despite being portrayed negatively by the media their true nature is entirely different. Rotties are very loyal which make them an ideal watchdog and they will also protect your family fearlessly. But for them to act viciously, that can happen only if they are trained like that.

When they have been efficiently trained from puppyhood, Rots will have a calm disposition and make wonderful companions. They do not take to new people immediately but take their time to gauge if the person is worthy of their attention. With their own family the Rotts are extremely affectionate and playful. This breed is ideal for experienced pet parents who have the time and energy to spend on a large breed.

To maintain their even temperament and calm disposition, Rotties need regular exercises. They are not meant to be kept in apartments but need a large home with plenty of space for them to run around. They need to be walked several times in a day and need an hour of running time as well. It is very necessary for Rotts to burn away their excess energy as a bored Rott will chew and destroy your home.

Training a Rottie can be quite a task, especially for inexperienced pet parents. This breed tends to be very dominating and thinks that they are in charge of the house. So, you need to show then who is the boss!

The training must be done with confidence and firmness. But never with harsh punishments. Remember this, a Rottweiler must respect you in order to adhere to your leadership. If you treat them harshly they will hold you in contempt and take the role of the leader themselves.

Rotts should be trained from an early age and before they can develop any bad habits. Socialisation also must be done early and regularly. Since they do not take to strangers immediately they should learn that guests pose no threat to the household and are most welcome.

Well brought up Rotties are wonderful to live with and show no aggression towards strangers. However, indiscriminate breeding of this dog has led to many Rotties to have unstable blood lines. Aggression is not a trait found in Rottweilers and any breeder who tells you so must not be believed. It is always a good idea to do a thorough research on the breeder or the lineage of the dog before bringing them home.

An undesirable trait found in Rotts are their desire to chew anything under the sun. If they are not exercised enough they will start destructive chewing and since they have strong jaws it is very easy for them to have your home in shambles, particularly your furniture. So, remember to always exercise your Rott before leaving them on their own.

Rotts are highly intelligent dogs apart from being affectionate and protective of their family members. If you have strong leadership qualities and are well experienced in training and handling dogs then this breed is ideal for you!