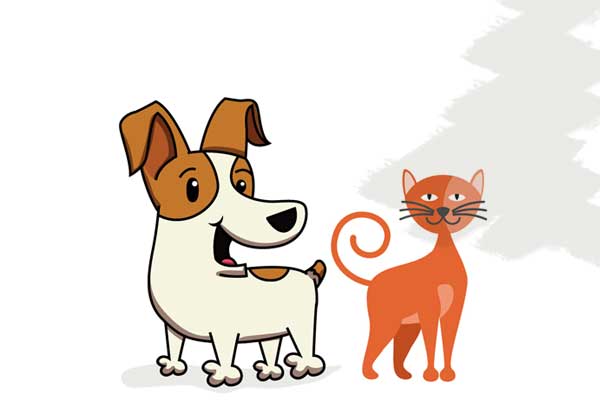 “You irritating creature! Always committing nuisance on our doormat! Oh! I am itching to whack you!” yelled the cantankerous old man. He held a stick to beat the naughty cat. The clever creature knew that the old man would come charging at her so she runs into Vikram’s compound. She is now safe. It is a daily routine for baasha the cat. She loves to take a nap on the old man’s portico and relieves herself on his comfortable doormat. She also loves to nibble on tidbits of food thrown to her by the old man’s granddaughter. Though she belongs to Nina, she loves to hang around by the old man’s place. Maybe she just loves to infuriate the old man by her mischievous presence thereby keeping him on his feet all day!

Baasha is named after Nina’s favourite Rajnikanth movie. She is actually a stray cat who was found by Nina when she was a day old. Her mother had abandoned her at Vikram’s backyard and vanished. Consequently, it was Nina who looked after it and it grew to be her beloved pet. A lot of people believe that cats and dogs can never be friends but I disagree with them. Baasha and I get on reasonably well as we understand and respect each other’s space. Of late, the old man is getting on both of our nerves. Something must be done to stop him. Yesterday he drenched both of us with a bottle of water because Baasha dared to grab a piece of fish thrown to him by his granddaughter. She jumped from their compound to ours and landed where I was having my afternoon nap when the old geezer threw cold water on us! Baasha and I then agreed to put our heads together to teach the old man a well deserved lesson!

It was a normal day for the old man. He did his grocery shopping and dropped into the bank to update his pass book. He then walked home and was closely followed by two sinister looking men who were just waiting to have him cornered at an empty road. The old man almost reached home when he was stopped by the two men who pointed a sharp looking knife at him and asked him to empty his pockets and hand them his gold rings. The old man started panting and stammering and looked around for someone to help him but not a single soul was present on the road!

Baasha and I were witnesses to the old man’s predicament. So, I asked Baasha to head out to the men. Baasha promptly ran towards the men and started hissing and made loud threatening noises. I, on the other hand, jumped across to the old man’s compound and gave my loudest bark and started scratching his front door. The old man’s son opened the door and I dragged him to the gate where he saw the commotion and immediately leapt to the old man’s rescue. Just then the police patrol car which was doing its usual round across the neighbourhood arrived. The policemen arrested the men and drove them to the station. The old man was finally safe!

After an emotionally charged day Baasha and I consigned ourselves to a well deserved nap and were woken up when Nina and Vikram came home. They brought home our favourite cup cakes! Yummy! They were just feeding it to us when the doorbell rang. Nina opened the door and in came the old man into our house. What he did next was too shocking! He went down on his knees and hugged both Baasha and myself! He apologized for all his misdoings and gave us a present. He then related the events of the day to my astounded looking two legged pets. Vikram then opened the presents for us. The old man gifted Baasha a brand new resting mat and a nice chewy bone for me! Vikram and Nina wholeheartedly thanked the old man and assured him that they bore no ill will. Baasha and I became busy with our gifts and congratulated ourselves for finally taming the old man!

Tip:   Having a pet around you is like having your own personal bodyguard. They will protect you from anti social elements. Dogs and cats have been known to risk their lives to save the life of their master!  Also, abusive behavior towards animals is a punishable offence and has to be reported to the concerned authorities.